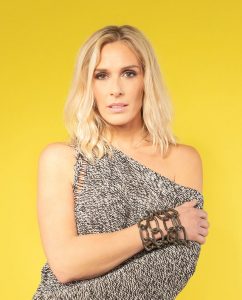 Monique McCall, a West Palm Beach resident, released her Internationally supported single ”Feel like Florida” and garnered airplay on 42 stations, with follow-up remixes by such Number 1 Billboard Club Play Producers as Mr. Mig, Mike Cruz and Austin Leeds who have had over fifty #1s between them.

In addition, she released her new country classic for the holidays “Everyday is Christmas” and is looking towards the future with even more momentum as she releases her next single “You Take Me There”, produced by Platinum and Grammy Nominated Producer Bryan Todd.

Monique’s talent and personality have lead to other great partnerships in the corporate and philanthropic worlds as well. She has teamed up Bacardi and Costa Cruise Lines as a brand ambassador and, most recently, her latest single “Feel like Florida” was chosen to be the official theme song of Bahamas Paradise Cruise Line.

Monique headlined a night at the Cowgirl Up national event for Susan G. Komen Foundation at the Brushcreek Ranch in Wyoming, and was nominated for her fundraising efforts as “Woman of the Year” for the Leukemia and Lymphoma Foundation.

Ms. McCall has provided musical renditions for the Annual Town of Juno Beach September 11th Event for the past several years and ends each remembrance ceremony with her own rendition “God Bless America.”

To donate to the Juno Beach Police Foundation please click the button below.

Public safety is our most basic community service and the irony is that the better we deliver the service the less people think about it. The children who walk safely to school, the neighbors who walk to the corner store, the commuter who walks home from the bus or train late at night, the senior citizen sitting safely on their front porch at sunset rarely think that they can only enjoy this kind of life because of the protection provided by their local police officers. In our daily life, we usually think about our police when something has gone wrong… When an officer dies or when he or she makes a mistake.

So it takes a special person to be a police officer—a person who can protect and serve, with strength and compassion, often without that recognition—willingly ready to put themselves in harm’s way so others can go about their daily lives.”